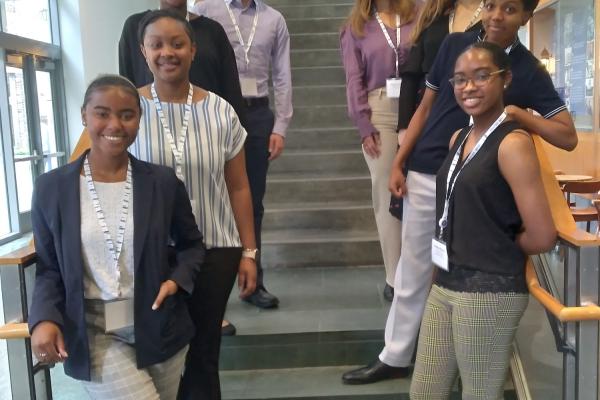 Eight students from five universities spent eight weeks of their summer at Duke University as part of the Summer Scholars Program in Genome Sciences and Medicine for Underrepresented Minority Underclassmen. They presented their research findings in a poster presentation on July 2.

Each student was assigned to a faculty mentor and research project based on their interests. “The best part of this experience was being able to be fully integrated into an existing lab on Duke’s campus,” said Emily Da Cruz, Summer Scholar from Duke. “It was a great feeling knowing that my research project would make an impact on the efforts of a skilled lab team.”

The Summer Scholars Program is often the first opportunity these students have to work in a lab and can help affirm and shape the academic focus and career path of the participants.Saxon, who had planned on applying for medical school after graduation, said the Summer Scholars Program shifted her academic focus: “Now I am looking to apply to medical scientist training programs as well as med school.” Echoing Saxon, Da Cruz said, “This experience has solidified my academic focus of pursuing medical school. It also helped reaffirm that I want to be involved in research while I am practicing medicine as well.”

While this summer’s program was slightly abridged – eight weeks instead of ten – students were still able to gain significant hands-on experience working in a lab, designing research projects, conducting experiments, and presenting their work. “I learned that being a researcher requires immense patience,” said Philomena Onasanya, Summer Scholar from NCCU. “But now I am actually looking into whether I want to pursue research further.”