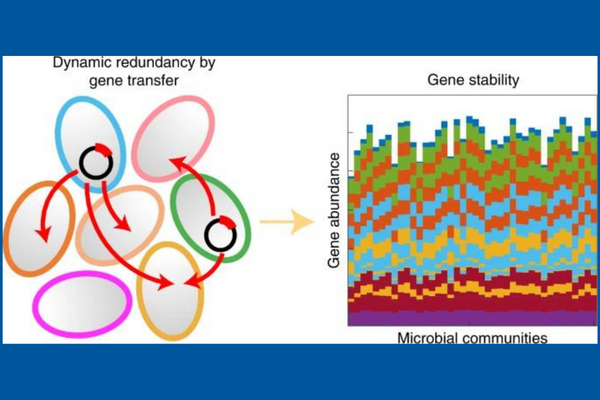 How functions in microbial communities remain constant despite varying compositions

Microbial communities, whether those found in the human gut, marine waters, seaweed, or wild bromeliads, can vary drastically, both in their species numbers and in composition. But despite the variations, certain functions in these microbial communities stay stable, and now researchers at Duke are understanding why.

Lingchong You, PhD, professor of biomedical engineering, and Lawrence David, PhD, associate professor of molecular genetics and microbiology, and their team explored the role that a process called horizontal gene transfer may play in maintaining core gene functions in vastly different microbial communities. Their findings, published in Nature Chemical Biology, could lead to new, easier strategies to treat disorders or diseases by introducing or removing certain genes from a microbial community.

“Traditionally, when we think about genetics,” David said, “it’s just assumed that you get your genes from your parents and you’re stuck with them.” But bacteria are unique: they can pick up genes from other members of bacterial communities. And that ability turns out to be critical to maintaining stable gene function in microbial communities.

One obvious workaround to avoid this is redundancy. If multiple members of group have the same gene, losing one member will not impact gene function. “If you have redundancy,” You said, “that redundancy can buffer against any fluctuations seen in the composition of that bacterial community.”

But redundancy doesn’t work in all settings.

So, another way to ensure continuous gene function is through horizontal gene transfer, which allows a gene to move around through the various members of the bacterial community. If a gene can move around, it no longer becomes dependent on a specific member to function. “So even if one member disappears,” You said, “another member can pick up the gene and cover that function.”

Speed is of the essence, though. If the gene doesn’t move fast enough through the members, it can become static. It’s like a bucket brigade working to put out a house fire. As long as everyone passes the bucket down the line quickly, they can put out the fire, but if any one person holds onto the bucket, the house will burn to the ground.

The key is to separate the function of the gene from the members of the community. If genes move very fast around the community, flowing from one member to another, it doesn’t matter if one member disappears. “Overall, the community doesn’t lose the gene function,” You said. “Instead, they pass it around.”

Horizontal gene transfer stabilizes gene functions within microbial communities, which helps explain how the human microbiota, for example, can help control digestion and play various roles in human health despite the fact that no two people have the same composition of bacteria in their guts.

“So maybe it doesn’t matter as much if you have a very well defined, healthy composition for microbiota,” You said. “Rather, maybe we need to focus on gene function, because they are more stable.”

It’s possible, too, that introducing a gene — or removing one — is easier than introducing or removing a bacterium. “If you wanted to combat antibiotic resistance, for example,” David said, “it might be easier to target the gene that causes the resistance rather than the bacterial species that houses it.”

You is interested in programming microbial communities that can carry out complex functions, and this division of labor could be key.

“Certain functions that microbial communities carry out entail a division of labor between members,” You said. For instance, different members may work together to remove a complex toxin or waste material or digest the growth substrate, like microplastics.

But it is challenging to control the composition of a microbial community. This research suggests that this might not be a concern; it might be simpler to control gene function to treat certain disorders and diseases or remove waste materials . “Horizontal gene transfer would allow us to precisely program the overall functions of a microbial community without maintaining a specific composition of that community,” You said.