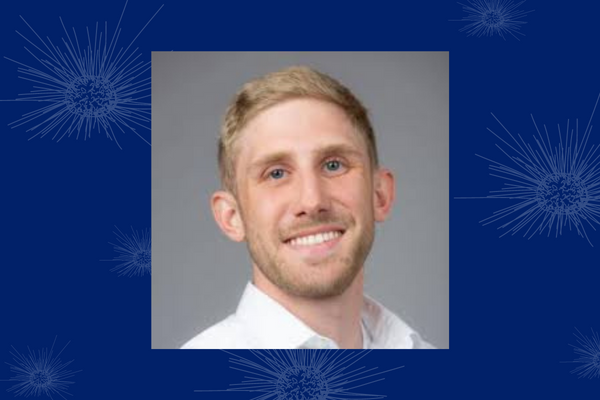 Lead author, Phillip Davidson, PhD, is a former graduate student in the Wray lab. He is now a postdoc at Indiana University. Here, he answers a few questions about this new research.

Describe your research and what you found:
Early embryogenesis is a critical point in multicellular development as it is the stage when many specification and patterning events are decided. As a result, researchers predict that early embryonic processes and genetic interactions are deeply conserved among related species given their importance for development. But several examples exist across the tree of life that appear to defy this rule.

There are two hypotheses regarding how early development may evolve. On the one hand, gene networks responsible for carrying out embryogenesis could evolve quickly to generate new phenotypes, even though these changes would normally be too detrimental to be maintained in a population. Alternatively, these gene networks could remain stable during embryonic evolution, and instead maternally-provisioned biomolecules, like proteins, mRNA, and lipids that are deposited into eggs during oogenesis are responsible for developmental changes and mask the underlying gene network.

We found the sequence and accessibility of many non-coding regions regulating gene expression has evolved in H. erythrogramma, and specification of cell types is highly delayed. Furthermore, genes composing the larval skeletogenic subnetwork in this species have been either lost or acquired alternative functions, which suggests a dramatic modification to sea urchin developmental gene regulatory network.

Why are sea urchins an important subject to study?
Sea urchins are a fantastic set of model species for developmental biology, evolution, and more recently, genomics. They are amenable to developmental perturbation, produce numerous offspring, develop rapidly, and have a wealth of genetic information acquired by the research community. Sea urchins also live in diverse habitats across the globe, and many species have evolved alternative developmental strategies (life histories), thereby offering natural systems to understand the causes and consequences of trait evolution. Lastly, recent work has resulted in the assembly and annotation of genomes from six sea urchin species and several more in the works. This representation permits comparative evolutionary and developmental analyses between species to better understand how genotype-to-phenotype relationships operate, and how these relationships evolve.

What is the importance of developmental gene regulatory networks?
At a conceptual level, gene regulatory networks (GRNs) are models describing genetic interactions occurring within or between cells and tissues. In this regard, they represent an important way of illustrating and computing how genes and regulatory elements interact with one another to activate or repress transcription.

At a biological level, GRNs are regulatory systems that carry out biological functions that cells, tissues, and organisms need to develop and maintain homeostasis. In other words, GRNs receive and respond to external signals, often resulting in a change in gene expression, and by extension, production of a phenotype. For example, GRNs can explain how stem cells differentiate into new cell types or how germ layers segregate during embryogenesis. Of particular relevance to this study, the genetic interactions composing a GRN are normally robust to perturbation and mutation in natural systems, thereby ensuring a cell or tissue type operates as expected.

What is the most exciting or promising thing about this research?
This research provides a concrete example of how early genetic interactions can rapidly evolve over short timescales to produce radical changes in body patterning and trait development. Instead of assuming early development is a developmental stage burdened with conserved, immutable genetic interactions, this study demonstrates even embryogenesis remains evolvable under appropriate ecological circumstances.

I hope this work encourages a more careful examination of early development in other systems that may be lead to a more complete understanding of the limits, or lack thereof, of embryonic evolution and organismal diversification.