Pace of Aging May Help Predict Risk of Dementia 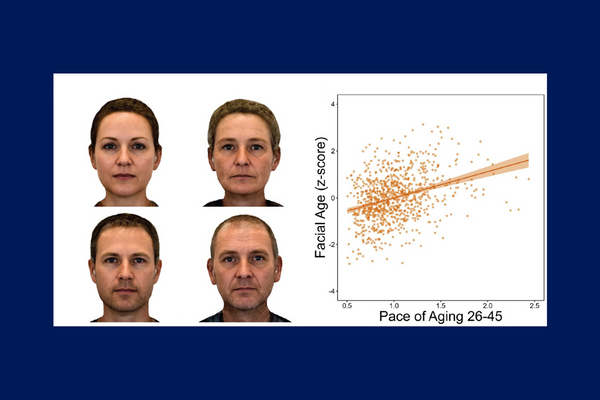 Even though we add a year to our age with every birthday, are our bodies actually a year older?

For some people, the answer is yes, but for others, maybe not. Researchers have found that some people age slowly, only experiencing a few months’ worth of physical aging in a year, while others age more quickly, in effect, growing years older in just one calendar year.

This may help explain why one 50-year-old might look like they are only in their 30s while another may look closer to 70.

Duke scientists recently discovered that the pace of aging may also serve as a powerful predictor of an individual’s risk of developing Alzheimer’s disease or other cognitive decline.

To determine the pace of aging, researchers use what they call “epigenetic clocks.” Our experiences and environmental exposures leave little signatures on our DNA, and those signatures, or methylation marks, accumulate and can help scientists measure how fast or slow a person is aging.

Terrie Moffitt, PhD, Nannerl O. Keohane University Distinguished Professor of Psychology and Neuroscience, and Avshalom Caspi, PhD, Edward M. Arnett Distinguished Professor of Psychology and Neuroscience, and colleagues took this process a step further. They wanted to know whether epigenetic clocks could be used to predict cognitive decline and whether there were differences in aging in people showing signs of cognitive decline and/or already diagnosed with Alzheimer’s disease or other mild cognitive impairment versus healthy individuals. Results were published in Neurology on July 6.

The team tested three generations of epigenetic clocks. The first generation was trained on chronological age. The second generation, while maintaining a focus on chronological age, also incorporated more health issues such as mortality and disease burden. The third generation clock, called DunedinPACE, used data from the Dunedin Longitudinal Study, an ongoing longitudinal study, now in its 50th year, that has followed the lives of 1,037 people born between April 1, 1972, and March 31, 1973, in Dunedin, New Zealand. DunedinPACE used blood-based DNA methylation – those signatures on the DNA – to measure aging.

“We found that, across the board, DunedinPACE predicted Alzheimer’s disease, mild cognitive impairment, and cognitive functional decline,” lead author and research project manager Karen Sugden said. “This was measured not only by whether they had a diagnosis of Alzheimer’s disease or other dementia-related diseases, but also by how well they performed on some standard tasks.”

Researchers could track the pace of decline using DunedinPACE. They discovered that the people who were doing more poorly in old age or were showing signs of cognitive decline were actually aging faster than those who weren’t. This new approach to tracking biological age using the pace of aging could become a useful tool to check for factors that accelerate aging as well as to track interventions that might slow it down.

“The evidence we discovered suggest that we can predict if someone is at an increased risk for developing Alzheimer’s disease based on how fast they’re aging,” Sugden said. “And if someone is on a path to dementia, perhaps interventions could help them age more slowly and provide some protections against additional cognitive decline.”

This means that DunedinPACE could be used to look for risk factors — and since it is not chronological age-specific, it can be used at any time with anyone, even young people.

The team will continue to research how DunedinPACE relates to overall health in individuals from diverse backgrounds and demographics. “We have promising evidence that DunedinPACE is applicable across the lifespan to a number of situations, risk factors, and outcomes,” Sugden said, “but we want to know how universal it is.”

The Dunedin Longitudinal study is approaching its half-century mark and still going strong, with over 94% of participants still enrolled. The Duke team is already making plans to return to Dunedin in 2024, where they will collect more samples, data, and other information, which could lead to an updated version of DunedinPACE.

From a biological perspective, we all age at different rates. Some of it is genetics and some of it is lifestyle and environment, dating back to childhood factors.

After seeing these variables at work in the lives of 1,000 life-long study participants in Dunedin, New Zealand, Duke researchers Avshalom Caspi and Terrie Moffitt have invented their own 'pace of aging' measure. Their new tool is based on the epigenetic markers of aging as a way to clinically measure the pace of biological aging.